First, they were called to the scene of a wildfire that ravaged through Jefferson County, Colorado, right outside Conifer on March 17. And then they served those affected by the 5.7-magnitude earthquake in Salt Lake City on March 18. Both happened during the ongoing Salvation Army coronavirus outbreak response.

“If there was ever an opportunity to show the mission of The Salvation Army carried out, it is now,” said Ian Anderson, Intermountain Division EDS Director.

The Salvation Army is one of the feeding leads within Jefferson County—meaning when there’s a feeding gap within the county, they are the primary organization called. So, when Anderson got a call, he assumed it was regarding the coronavirus. But it was actually for the wildfire, which burned through 50 acres.

“Up until that point in the day, we were working on coronavirus response. It’s crazy,” Anderson said. “This is certainly not the time of the year yet for wildfires.”

The EDS team arrived on the evening of the fire to provide snacks and water to first responders. Extra COVID-19 precautions were taken. Food safety, as always, was taken seriously, and The Salvation Army had hand sanitizer available for the firefighters to use before touching any food.

With the virus outbreak ongoing, the response from the first responders to The Salvation Army’s presence was a bit different this time around.

“Of course, they are always happy to see us. But it was another level of happiness,” Anderson said. “I don’t think they expected us to come out. I think a lot of the first responders are feeling…like they’re out there on their own. They were really happy to see us there to simply just be there for them.”

Then, the next day, the earthquake hit Utah. Most, including The Salvation Army in Salt Lake City, were without power for well over 12 hours.

That same day, The Salvation Army received about 10 truckloads of food donations from Utah Food Bank instead of the typical one truckload, as other community food pantries were closed. So, with the help of generators, the Salt Lake City Corps still opened its food pantry to those affected by the earthquake, coronavirus, as well as just experiencing general need.

However, instead of “shopper’s choice,” they handed out 89 food boxes at the door in front of the corps. Clients were not allowed past the entry of the building to prevent the spread of the virus. And there was no close contact with any clients.

“There was quite a bit of standing outside with some distance [between people] consoling them through the emotional, the spiritual, and the stress they were going through,” said Captain Rob Lawler, Salt Lake City Corps Officer, Salt Lake City Basin Coordinator, and Utah State Capitol Liaison. “What we did notice was that there were people sharing and expressing that they keep going to the grocery store and there isn’t anything there or they’re short because they haven’t been to work for a week or so.” 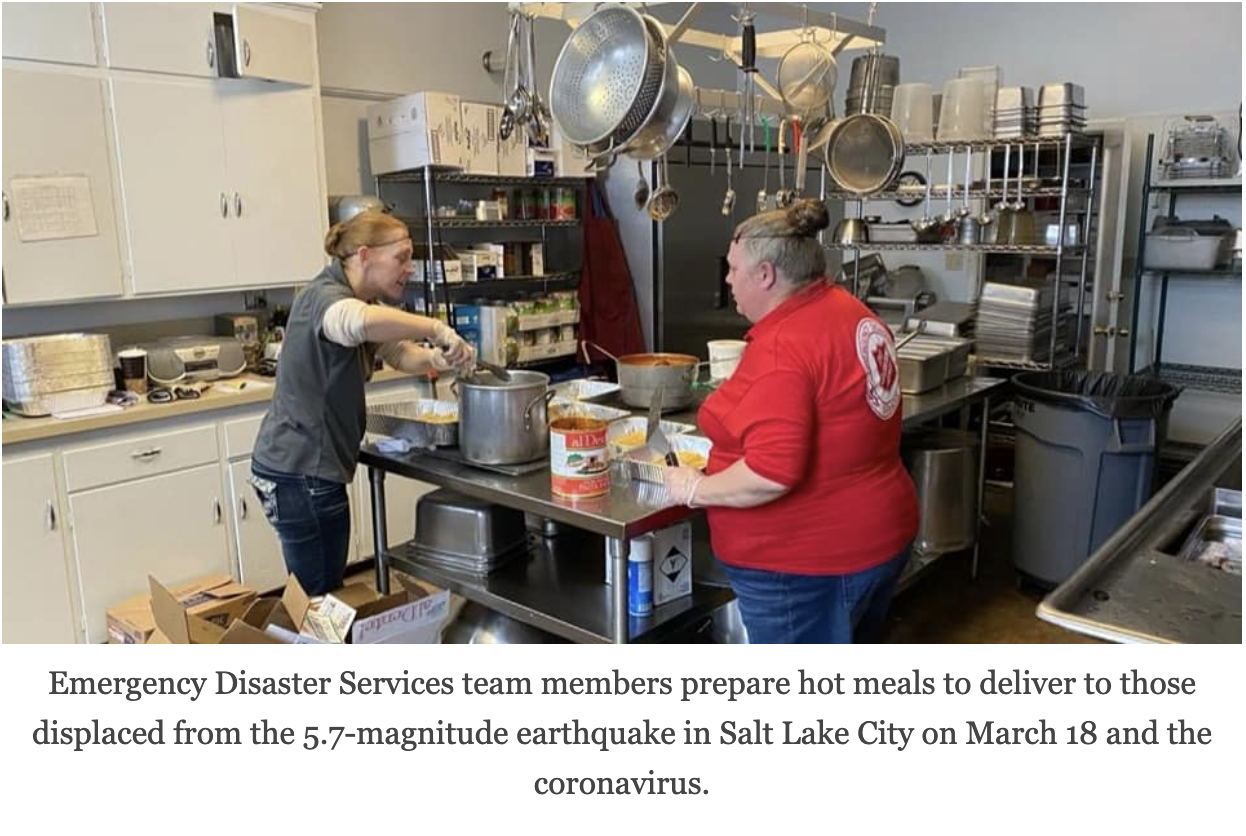 The team preparing food boxes is limited to one or two workers who must wear gloves while packing them.

And later that night, the EDS team delivered 400 meals from the local Texas Roadhouse to the emergency shelter at Taylorsville High School—the only shelter open in the area. The Salvation Army partnered with the restaurant to purchase the food at a discounted rate.

“We intentionally went to a business that we knew could benefit from us buying meals so that we could put money back into the community that way,” Lawler said. “And they were happy to work with us.”

Response efforts continued March 19 with EDS workers preparing meals to deliver to people displaced by the earthquake or impacted by coronavirus, as well as first responders.

“My team is amazing,” Lawler said. “We’ve all pulled together, and we all have our jobs to do and we get it done.”

The corps will remain open for takeaway food box distribution daily from 3-4:30 p.m. Additional coronavirus safety measures in place include maintaining a high standard of cleanliness and distance between workers and clients, and constantly sanitizing door handles and wiping surfaces.

“One of the things that we would hope is that this crisis not put people into homelessness. I know some people are right on the edge,” Lawler said. “We’re hoping to make things easier for people.”

Anderson acknowledged the long road ahead with COVID-19 response and local emergencies that will come up. But he knows the Army is up for the task.

“Collectively…this is our complete focus right now as an Army. While of course there are challenges, we are rallying together in this,” Anderson said. “We are just showing up in a big way everywhere right now. It’s an incredible time to be part of The Salvation Army.”