On Thursday afternoon at this year’s CRUSH Walls Festival, a group of local families worked on a wall in the Denver Central Market parking lot.

They stood or knelt, painting between the lines drawn by artist Lindee Zimmer as Zimmer herself bustled around in a boat captain hat, chatting with family members or teaching kids to avoid painting over the neighboring murals. As they worked, a gradient of warm, swirling colors appeared on the wall before them, overlaid with the words “None are free until all are free.”

When Zimmer was given a spot at this year’s CRUSH, she knew she wanted to use it as an opportunity to involve the community. She reached out to a number of neighborhood schools. She enlisted the help of young local artists she’d been working with and invited families from The Salvation Army’s Lambuth Family Center to participate.

That happened to Dani’Marie Brownle, a fifth grader who was passing by Zimmer’s mural when Zimmer invited her to help. Brownle said she loves art and was excited to get the chance to work on the wall.

“When I was in first grade, my teacher didn’t really believe in me. She let all the other kids tease me. I don’t really have as much self esteem because of that,” Brownle said. She was happy Zimmer asked her to join in. “It makes me feel kind of good, because I like to be a part of things.”

Latifah Bannon was there with her children. She’d heard about the project at the Lambuth Center and saw it as an opportunity to do an activity as a family — something they hadn’t had the chance to do in a long time. She said it was exciting to create something lasting, something that other people would be able to see. 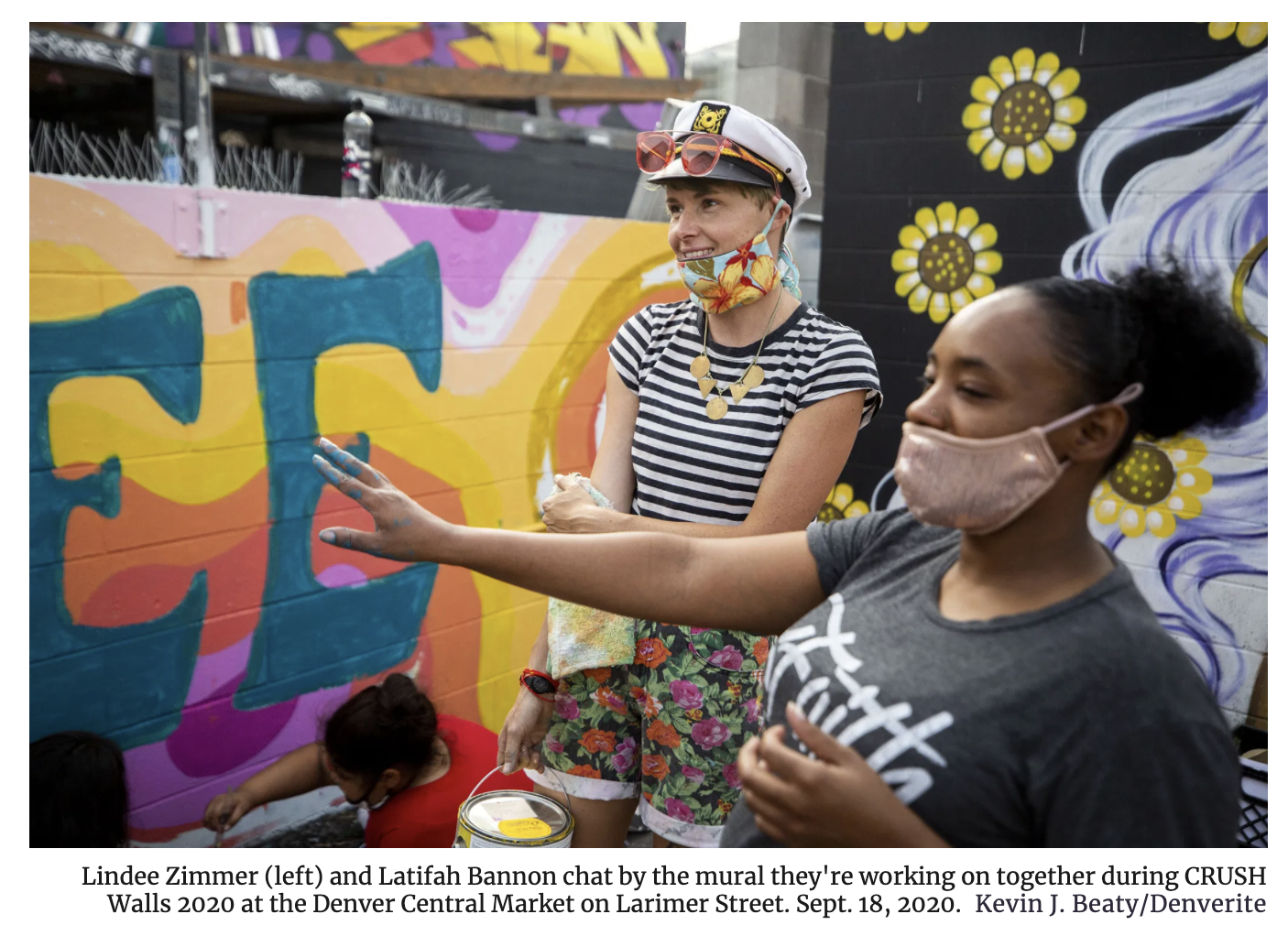 “It makes us feel like we’re on our way,” Bannon said, laughing. “On our way to the top.”

Bannon said that a lot of her kids are interested in the arts — in painting, music, clothing design, photography and architecture. She said that working with Zimmer might help to prepare them for a career in the art world.

One of Bannon’s daughters, sixth grader Jordan Ward, loves to paint. She likes mixing the colors and making pretty things that inspire people. Ward learned to paint from watching YouTube videos at home, and said that it’s nice to learn from an artist like Zimmer in person. She said that having someone to help her with her art takes some of the stress off of it.

“When no one helps, it makes me more stressed. I hate feeling stressed,” Ward said. “When someone helps me, I feel good.” 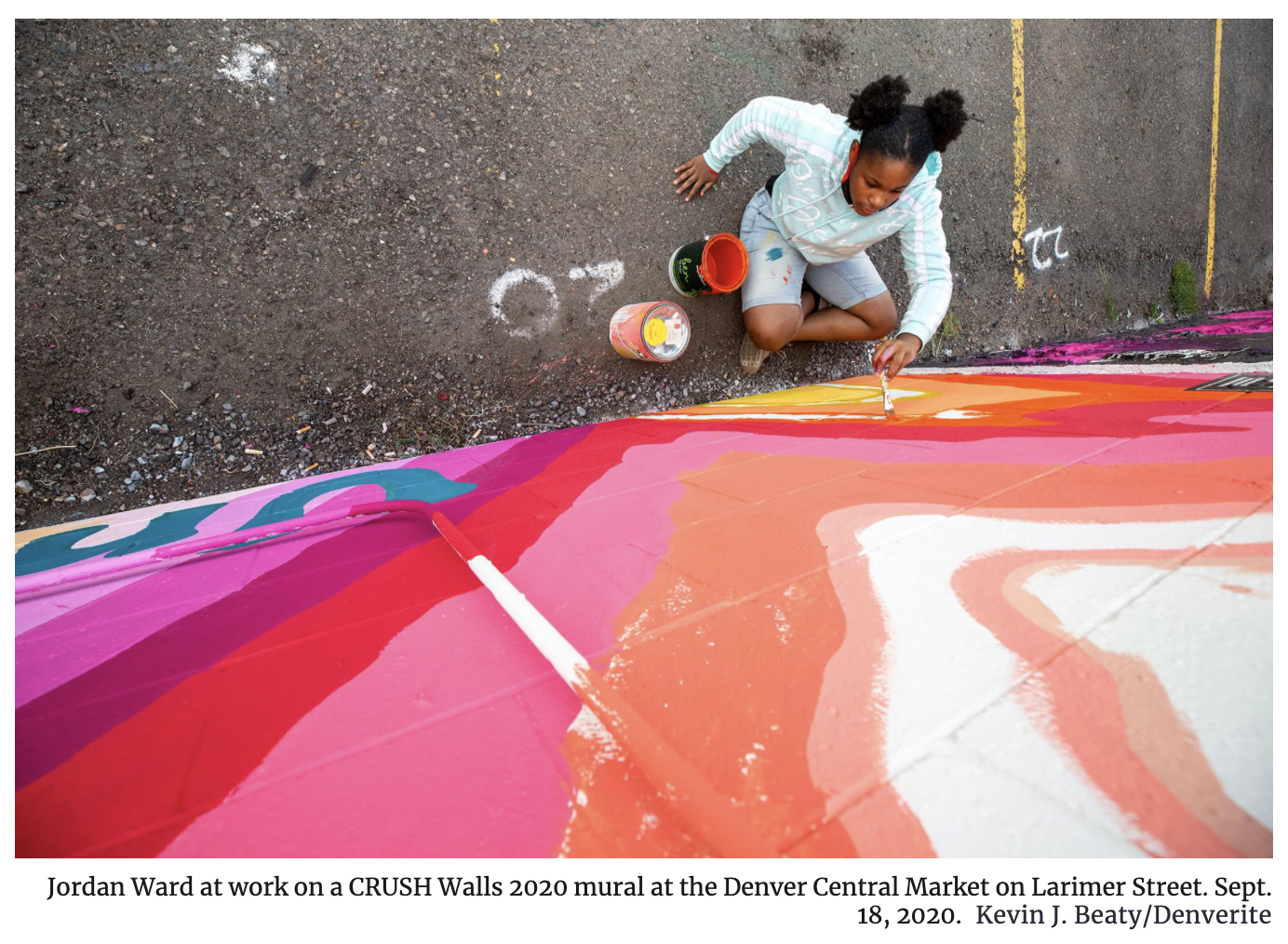 Fourth grader Liliana Valdez-Rivera is also interested in art. She said she wants to be a clothes designer one day and loves to draw.

“It’s cool, because I have never done anything like this before,” she said. “I never thought that anybody would ask me to draw anything but my art teacher. ”

Her mother, Maria Rivera, says it was exciting to work on the mural with her two daughters, to get out of the Lambuth Center and do something fun. She says her kids don’t get out of the Center much because they’re a bit shy, and because Rivera works and doesn’t have the time or funds to take them on many outings.

“It’s a good experience for them to see that they could be involved in a community,” Rivera said.

When she was young, Rivera had a similar opportunity: She was invited to participate in a mural painting through Metro North High School.

“I never thought I was going to be involved with the community,” Rivera said. “I didn’t think anybody cared about me, about what I thought.” 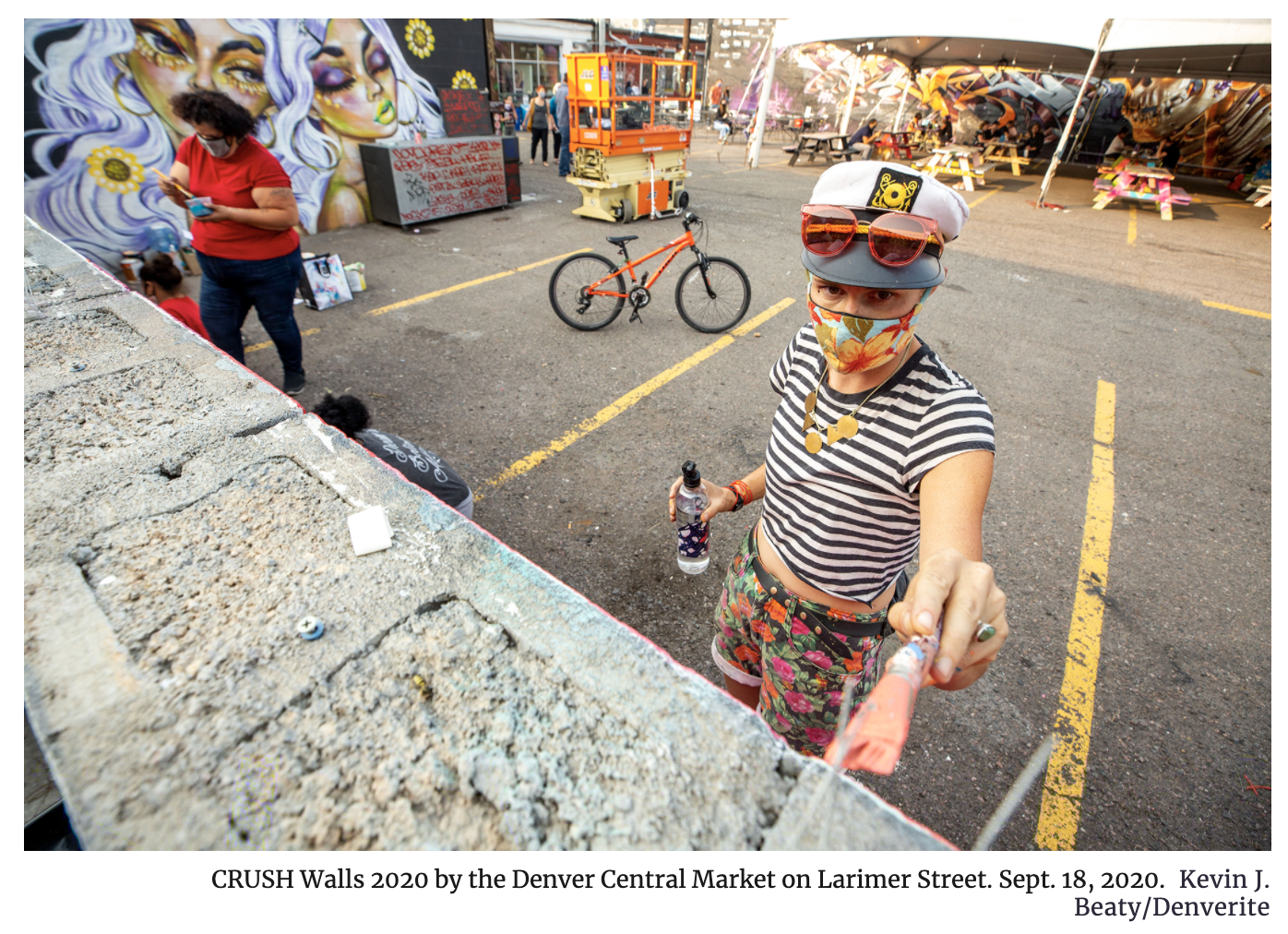 Zimmer’s CRUSH wall is one of a number of community-oriented projects she has undertaken in the last year. Zimmer said that through projects like the CRUSH wall, she hopes to engage young people — and especially BIPOC students — who are interested in art. She said that a lot of schools don’t have funding for art programs and hopes that by showing aspiring artists what it’s like to actually work in the art world, that they might see art as a viable career path.

“You are what you surround yourself with,” Zimmer said. “So if I can be around, and kind of show people what it looks like to be in my life and what I do — that it’s hard, but it’s very fruitful — I hope to pass that knowledge on.”

Zimmer’s art career has long intersected with a career in education. Before becoming a full-time artist, she worked as an art teacher, and before that, she was a camp counselor. She grew up in Boulder and attended an art-focused high school with teachers who could foster her interests and opportunities to see where those interests could take her.

One such opportunity sparked her own interest in murals. When Zimmer was in high school, the artist Ken Bernstein reached out to her art teacher. Bernstein had received a grant to paint a mural on the Boulder Public Library and was inviting art students like Zimmer from area high schools to help him create it.

The project began with writing workshops, where Bernstein helped to facilitate the students’ ideas. Those ideas later developed into imagery for the mural, which the students then helped him paint. Zimmer said he even paid them for their work.

“It was a very transformative experience for me,” she said. “While I didn’t go into public mural painting until later, it planted a seed for me.”

One of the young people Zimmer enlisted to help with her CRUSH wall is Isaiah Askw, a 21-year-old artist who has been pursuing art since high school. Askw launched his career on social media, posting hyper-real portraits. He said he built up a big online following.

“I reached some pretty pretty big places,” Askw said. “But I realized quickly that the art industry is not exactly what everyone thinks.”

Askw said that his lack of experience made it easy for people to take advantage of him and sometimes to steal his work. He met Zimmer at a time where he was ready to give up on art altogether.

“She kind of brought me a little bit of hope at the moment that I was in,” he said.

Askw said Zimmer helped him to learn the business side of art, the side people don’t see. She taught him how to build a local career, about contracts and follow-up emails. She taught him to document every business interaction so that people couldn’t take advantage of him again, to value his work and to only work with people who valued his work, too.

Zimmer said that working with Askw wasn’t about teaching him how to paint. He was already a talented artist.

“I’m teaching people how to advocate for themselves and to ask for enough money to live on,” she said. “It’s advocating and kind of removing some of the roadblocks that would maybe dissuade people from it. Because it’s hard. It can be really intimidating.”

She said that in addition to the challenge of representing yourself in the art business, there are financial barriers to entry. There’s the cost of transportation to and from a project, the cost of equipment and paint supplies and the fees to even apply to participate in mural festivals. All of it adds up.

Zimmer said CRUSH brings a lot of outsiders into Five Points and that although the art might help to beautify the neighborhood, it also speeds gentrification there. She said she tried to involve a group of preschoolers from Five Points to help with her CRUSH wall for that reason, but that it didn’t work out because of COVID.

“I’ve just been trying to be a better white person,” Zimmer said. “And I don’t really know how to do it, but I’m gonna do it the best way I can.”

At the Babe Walls festival in Westminster earlier this summer, Zimmer chose to paint local writer, artist and healer Toluwanimi Obiwole, as well as local writer and activist Katie Leonard.

“It was an absolutely absolutely amazing experience,” Zimmer said, “Because all the people there were so stoked to have some love put into a place that hadn’t had a lot of love and had been kind of notoriously neglected.”

Zimmer said as she was painting, a man came up to her and thanked them for painting the neighborhood’s walls. He said he’d lived there a long time and now felt that crime might decrease there because of the art. He said the neighborhood already felt safer.