To cope with the COVID-19 pandemic, The Salvation Army in Denver opened a new 24/7 men’s shelter, called the 48th Street Shelter, in less than a day. It also converted its Crossroads Shelter into a 24/7 facility.

Originally, some men from the Crossroads Shelter were supposed to move over to the new National Western Complex center in order to allow for social distancing.

“People experiencing homelessness are two to three times more likely to contract the illness, get hospitalized and die, all because they have compromised immune systems because of the stress their body is under,” said Kristen Baluyot, the Denver Metro Social Services Director for The Salvation Army Intermountain Division. “That’s why we were trying to take as many precautions as we could to keep people safe in a protective way so they don’t get impacted. It could be quite detrimental to this population if we weren’t taking these precautions.”

When the National Western Complex filled up too fast on Thursday, April 9, officials at The Salvation Army knew they needed a Plan B, and quick.

“We contacted the city (of Denver) Friday morning and proposed a few options, all of which included us rolling out some sort of new capacity for sheltering,” Baluyot said.

The city agreed to let them open a new Salvation Army facility at the 48th Street Shelter, a large warehouse owned by the city. The building, operated as a shelter by the Denver Rescue Mission, had shut down to consolidate resources at the National Western Complex. By that evening, they’d gotten approval from the city to move forward.

With snow in the forecast and social distancing top of mind, the team had no choice but to move quickly, said Rene Arxoc, the transitional housing manager at Crossroads who is serving as the program manager at the 48th Street Shelter.

“It wasn’t just three or four people who were involved—it was a lot of people who at the last minute pulled resources together to make this shelter happen,” Arxoc said. “Words don’t really express the intensity of what it took to open in 24 hours. It was day and night texting and emailing, coordinating, to make things happen. From the outside it might look like chaos, but it was well coordinated.” 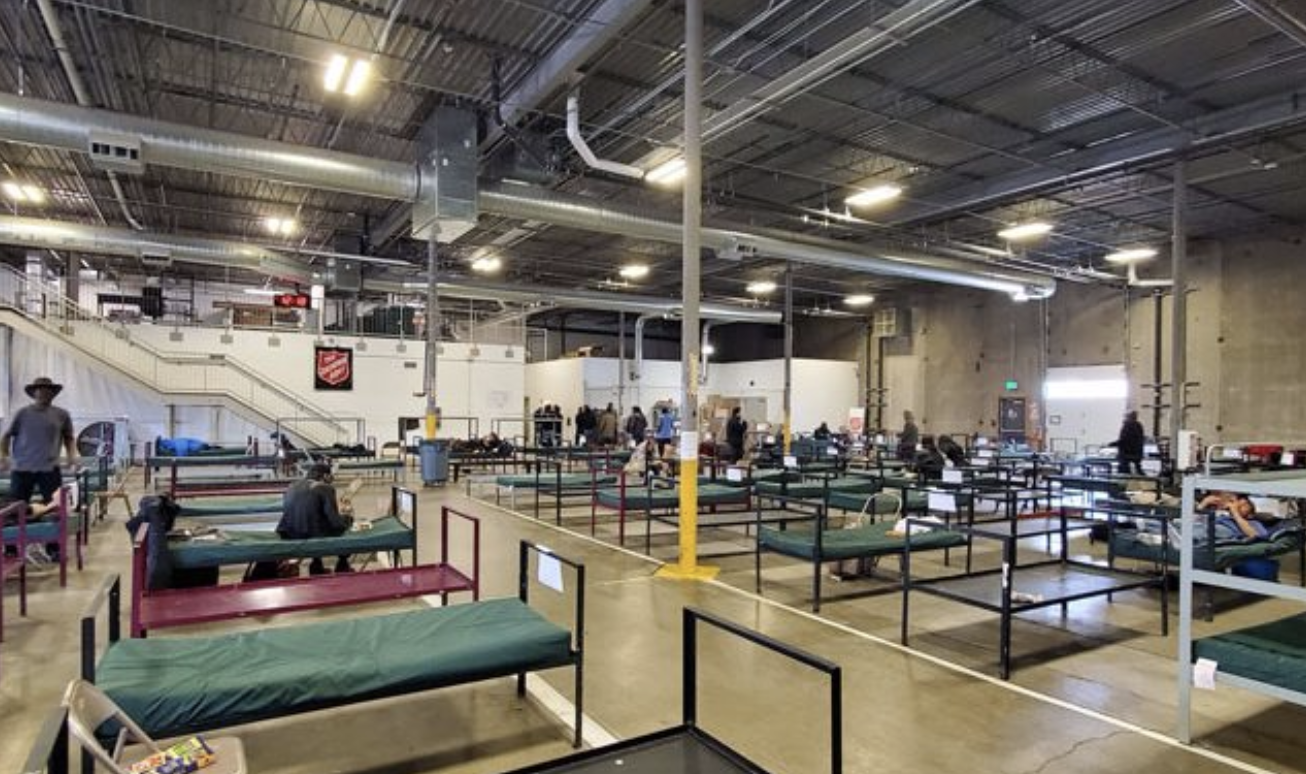 The next morning, Major Richard Pease, The Salvation Army Intermountain Divisional Secretary for Business and Captain Eric Wilkerson, who runs the Crossroads facility, joined a couple dozen volunteers to thoroughly clean the facility and ensure the beds were appropriately spaced six feet apart.

“They were all super generous and willing to be hands on and do it happily,” Arxoc said. “That’s part of why I love working here—there’s never any complaining or whining.”

Thankfully the facility was stocked with beds and mattresses but The Salvation Army team set up three meals a day for both facilities (Crossroads usually just serves two meals each day) and found enough staff to run the new shelter.

Baluyot brought over some staff from Crossroads and hired some temp workers; with the plan to be fully staffed at both shelters by the end of the first week, she said.

By Saturday evening at 5 p.m., around 24 hours from when the shelter was approved, men filed in to spend the first night.

All in all it’s gone pretty smoothly, Arxoc said, with case managers helping to keep an eye on the men, and watch out for possible health issues.

“We’re all staying vigilant and anyone who we think might have symptoms anywhere near pneumonia, cold or flu we’re checking in on and watching,” he said. “Everyone seems healthy so far. We’re asking them to take the basic precautions like washing hands and covering mouths, though in general many of the men aren’t good about following rules, no matter how simple or beneficial. We have to be very, very patient with them and keep suggesting it.”

Additionally, four members of the National Guard are helping with cleaning, laundry and serving meals.

The new shelter has capacity for 249 men but has averaged around 143 men the first week, except one snowy night where the number increased by 40 or so, Arxoc said.

“During times of need, The Salvation Army is here for each member of our community,” said Major Mike Dickinson, Divisional Commander. “We must adapt to protect our most vulnerable neighbors, and ensure they get the support they need.”