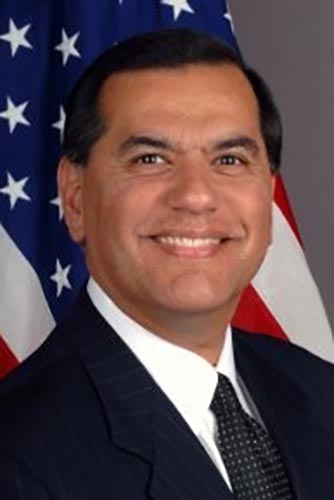 Until 2019, Gaddi H. Vasquez served as senior vice president of Government Affairs for Southern California Edison (SCE), one of the nation’s largest electric utilities, and its parent company, Edison International. He was responsible for government relations activities at the Federal and State level, as well as Local Public Affairs.

He is the descendant of a migrant working family and was the first in his family to earn a college degree. He began his 27 public service career as a police officer in the City of Orange, California and has served at city, county, state, and federal levels of government.

Prior to Edison International, he served as U.S. Ambassador and permanent representative to United Nations Agencies based in Rome, Italy. There he managed a U.S. multi-agency team responsible for oversight of U.N. Organizations.

From 2002-2006, Ambassador Vasquez served as Director of the United States Peace Corps where he led the international volunteer service organization with volunteers and staff serving in 78 countries. Vasquez has served on the President’s Commission on White House Fellowships and has been appointed by three California Governors to state boards and commissions.

He currently serves on the Boards of Directors of the Public Policy Institute of California, the International Republican Institute, Segerstrom Center for the Performing Arts, chairman of the Aspen Institute Latinos and Society, the board of trustees of Chapman University and most recently, the National Advisory Board of The Salvation Army.

Ambassador Vasquez has been awarded the Globe and Anchor Award by the Marine Corps Scholarship Fund and is the recipient of the Tree of Life Award by the Jewish National Fund. He has been named as one of the 100 Most Influential Hispanics in the United States by Hispanic Business Magazine on multiple occasions.

In 2014, he was awarded the Ellis Island Medal of Honor and in 2016, he received the Bill of Rights Award by the Constitutional Rights Foundation. He is the recipient of the William Booth Award by The Salvation Army as well as The Others Award. In 2019, the Pat Brown Institute awarded Ambassador Vasquez their Global Leadership Award.