In the remote village of Hoonah, Alaska, The Salvation Army has created a unique approach to raising money: by selling doughnuts. From May to September, cruise ships of all sizes stop at the port in Hoonah, and the hungry tourists coming off the ship discover The Salvation Army’s small doughnut shack, where they purchase the delicious & fresh mini-doughnuts in droves.

Major Kevin Bottjen
“Hoonah is on an island and as an island there is two ways to get here: fly or float.

It’s a beautiful place to live. We see whales in our front yard dear and bear in our backyard. A population of 750 to 800 people year-round.

Subsistence is a lifestyle here. We live off the land as much as possible. We’re actually in deer hunting season, so that’s what a lot of us live off of throughout the year. Then there’s fishing; we’ve got salmon, halibut, crab, shrimp, sea asparagus and seaweed.

Icy Strait Point is a stop for the cruise ships. It’s owned basically by the people of Hoonah and they’ve done a very good job. So basically, we are a tourism-based society so we have from May 1 to September 30; that’s when they make the money.

When we first moved here, we went down to Icy Straight Point and there was an empty hut, and I looked into the window, and I saw all this doughnut equipment and I just thought it’d be kind of neat to do something like that.

Baking has been a big thing for me. I love the science behind it. I love The magic behind it. Doughnuts were synonymous with the donut girls in The Salvation Army in World War I, so we bought it.

And well, I had to learn how to make doughnuts!

I just started experimenting. Some of the flavors instantly where hits. Some of them were accidents.

Our Sriracha started as a prank. One of the guys wanted to prank his boss with a hot spicy doughnut, so I took the challenge on. It ended up being a very good flavor.

Alright, so this machine can do up to 12 hundred mini donuts an hour. The batter goes in here. It makes a river of hot oil, so you can speed the flippers up to make sure that these get cooked all the way on both sides.

Over here is our steam table which we can use to keep them fresh and warm.”

Customer 1: “They fry ’em like literally right in front of you they’re coming out as you’re waiting in line.”

Customer 2: “They’re very warm and soft to the palate.” 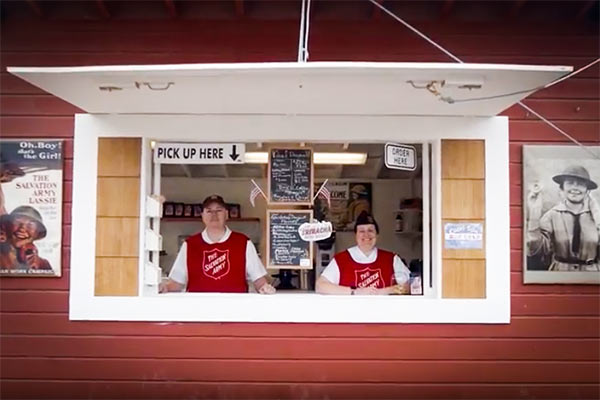 My favorite’s pistachio and of course, and we got maple bacon.”

Customer 4: “Oh my gosh. These mini donuts are fabulous, they just came out of the cooker they’re warm and yummy. And we came all the way from Atlanta Georgia just to have one.”

Major Tina Bottjen
“A lot of people ask, you know, ‘Why the donut shop? Why is The Salvation Army here doing this?’ And I’m able to share with them a lot of the things that we do here in Hoonah to help our community.”

Major Kevin Bottjen
“There are times that winter gets pretty extreme.”

Major Tina Bottjen
“It’s just colder; the utilities go up more due to the fact you’re using more electricity to help heat your homes, so the money that they earned through the summer months starts running out, so we help with utilities.”

Major Kevin Bottjen
“Money starts drying up for many families around February and then that’s when, because of the funds raised through the doughnut hut we can help with food boxes, we can help with rental assistance.”

Major Tina Bottjen
“We have our food box program, it’s usually about three to five days-worth of food and we go and deliver it to them because most people in the community don’t have vehicles, so we go to them.

One of my favorite things down at the donut shop is how many people from the community come and ask us for prayer sometimes. That’s one of my
greatest rewards.”

Major Kevin Bottjen
“The donut hut helps make what we do here realistic. The monies raised are incredible.
Our saying on the sign, it says, ‘Help feed your hunger while feeding the hungry,’ and that’s really what we’re doing out there at the doughnut shop.”