AURORA | Donations to food pantries like Aurora’s Salvation Army outpost are a fraction of what they usually are during the holidays when, in normal times, red-capped bell-ringers collect charity at grocery stores and community centers.

Meanwhile, more than 100 people line up every day at the Christian charity organization to grab their free box of food, meant to last one a family a week. And because a family can only pick up one box per month from Salvation Army, every day brings new faces to the line for free food, said Aurora Corps Officer Sam Lemar.

On Tuesday, the socially-distanced line stretched down the block. 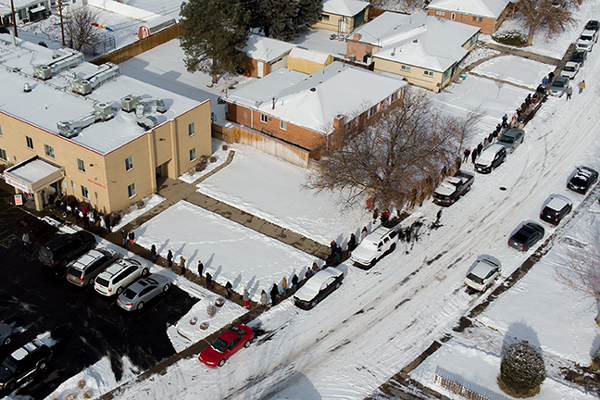 It’s a typical day for soup kitchens and food pantries as 2020 ends. Staff relentlessly provide for residents who are unemployed or living on the edge as the pandemic rages on.

“Rents are $1,500 a month. And people are struggling. I mean, it’s really hard for people right now, for so many reasons. Yeah, we’re seeing lots of new people that we hadn’t seen before,” said Siobhan Latimer, who runs Friends of St. Andrew soup kitchen at 1525 Dallas St. “I worry about people on the street at night freezing to death.”

With the holidays approaching, new unemployment claims in Adams and Arapahoe counties have ticked back up during the third wave of virus cases to levels last seen in May.

Lemar said Salvation Army has served more people this year than the last two years combined. He estimated about 60% of those people are new to the lines, coming after the pandemic began.

On Monday, about 140 people stood in line for a food box at 802 Quari Court. The box usually contains non-perishable items like soups, rice, noodles and beans but also some treats for kids.

At Friends of St. Andrew, Latimer said staff served 44,000 people so far this year — double the typical amount, she said.

She recalled that a volunteer once recognized someone picking up a meal earlier this year. It was a waiter who had served the volunteer at a high-end restaurant but was laid off.

Less people are volunteering with social distancing requirements, especially senior citizens at more risk of succumbing to the virus. Less people are also donating, Lemar said, because of economic hardships.

Recently, the City of Aurora provided Salvation Army with 1,500 grocery gift cards worth $80 each. Lemar said the demand for those cards has been huge. He noted that residents can only spend the dollars at King Soopers stores for food, not tobacco or alcohol.

Little Flower Center, a food pantry and resource hub at 11149 E .14th Ave., received a federal Community Development Block Grant to redesign the building. The overhaul includes building a drive-through with the dollars, said Catholic Charities of Denver spokesperson Nissa LaPoint, so people can pick up food or other goods without being seen. 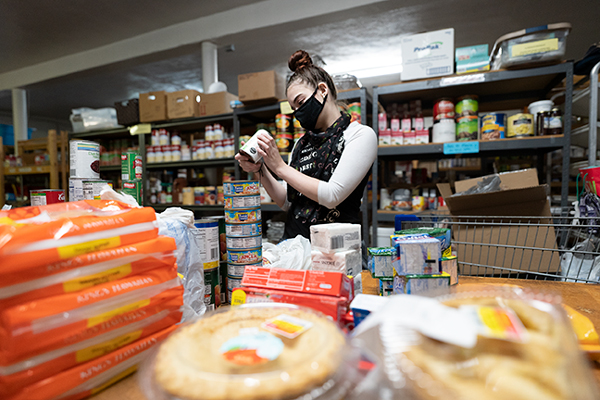