George A. Lewis, Jr. was born in Angoon, Alaska on February 8, 1913. He was of the Killer Whale clan (Dakl’aweidi‘). He had three Tlingit names: Gushteiheen (Killer whale fin moving through water); Sa.aat (a sudden chill from a whale spout); Naage’ (among the tribe).

Shortly after his birth, his mother moved George to Sitka where he was raised by Mark Jacobs, Sr. The Jacob family members were Presbyterian, but they attended the Salvation Army on occasion.

Soon after the outbreak of World War II, Mark Jacobs, Jr., Harvey Jacobs, and George A. Lewis, Jr. entered the military. They were assigned as ”Code Talkers.” Tlingit Code Talkers used the Tlingit language as a code that the enemy was never able to crack. For many years the families of the Tlingit Code Talkers did not know of their secret service.  Following the Second World War George moved to Ketchikan in search of employment where he met Matilda Watson (Das Ox, tooth of a dog salmon) from Klawock. She was working at the Post Office when they met. Matilda was a Salvationist, and her parents and siblings were also soldiers. Matilda agreed to marry George if he promised to attend the Salvation Army meetings with her. They were married April 18, 1945. 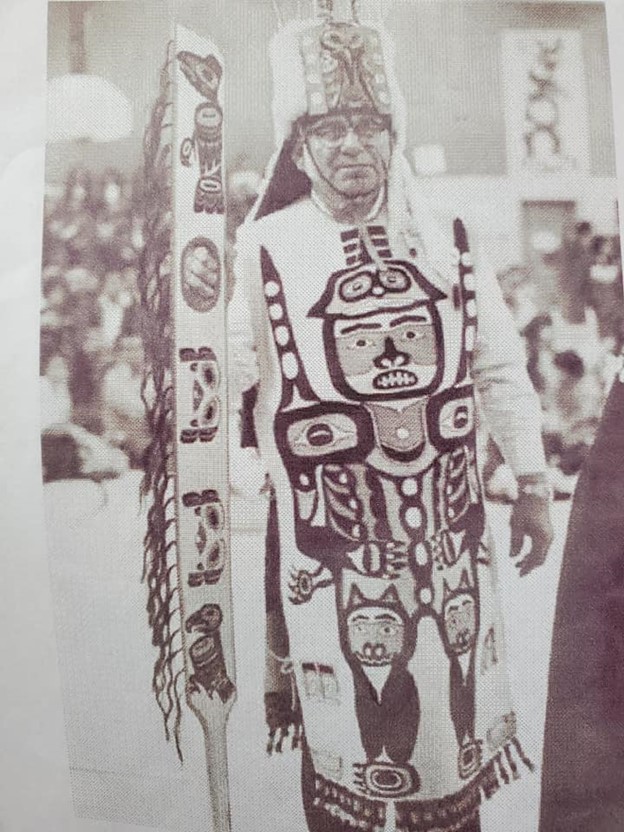 George and Matilda moved to Sitka where they had two children: Evangeline (Ruth) and Verna. The two children were dedicated at the Sitka Corps. George became a Senior Soldier in Sitka. In 1951 the Lewis family moved back to Ketchikan to seek work. George worked as a Long shoreman and sharpened tools. While in Ketchikan they had five more children: Georgianna, Verna, Florence (Major Flo), Diane, and Raymond. These children were dedicated at The Salvation Army in Ketchikan. In 1959 the Lewis family moved back to Sitka. During this stay in Sitka George served as the Quarter Master for the Haines Corps. He worked on a number of projects at the Sitka Corps that included constructing a pulpit, two prayer benches (penitent form), and a Holiness Table. Major Dolores Rivitt (Captain at the time) was the Corps officer during part of the Lewis’ stay.

Once again the Lewis family decided to relocate to seek work. They moved to Juneau. George and Matilda became good friends with Austin and Lillian Hammond. Austin (Daanawaak) encouraged George to move to Haines in order to assist with the development and opening of the Salvation Army Haines Corps. Envoy Austin Hammond, George Lewis, Jr, and several others conducted meetings at a house in Haines known as Yeil Hit (Raven House). Later the Haines Corps building was built along Union Street.

During the 1960’s the Haines Crusaders were formed. It was an Alaska evangelistic team made up of approximately twelve Tlingit Salvationists. Captain Bill Stanley was the corps officer during part of this ministry. The Crusaders traveled to other communities in Southeast Alaska where they conducted evangelistic meetings, and they encouraged other corps to form groups. George was the Senior Songster Leader at the time of the forming of the Crusaders.

During the late 1960’s and early 1970’s George served as the Haines Corps Secretary. For several years in the 1980’s he served as the Corps Sgt. Major. George served as a faithful Soldier of God and The Salvation Army until he was Promoted to Glory on April 9, 1995. In November 2013, Congress awarded silver medals posthumously to the Tlingit Code Talkers 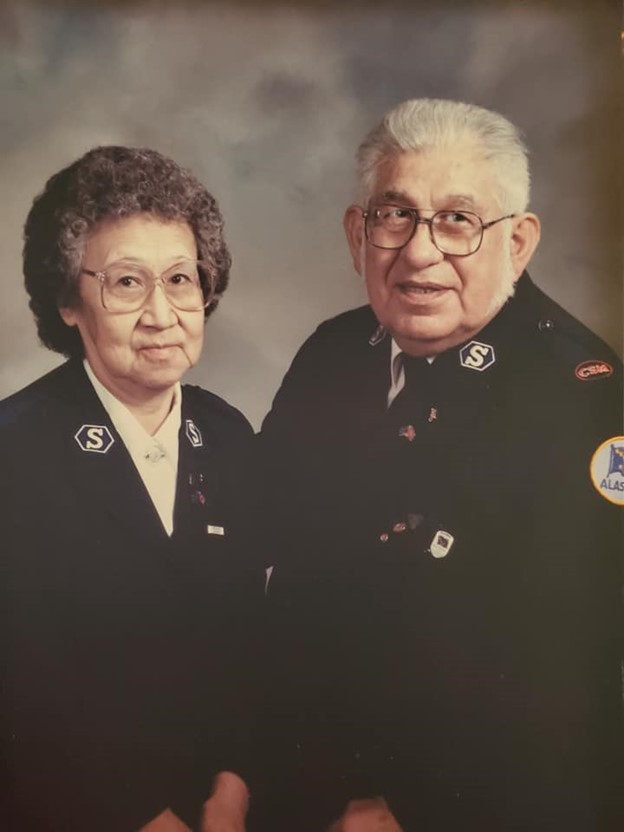 To read more about George and others of the Tlingit tribe who served as  Code Talkers for the United States military during WWII visit these links.

The Tlingit Code Talkers from the Military Times: https://www.militarytimes.com/news/your-military/2019/03/27/tlingit-code-talkers-feted-in-alaska-for-world-war-ii-role/