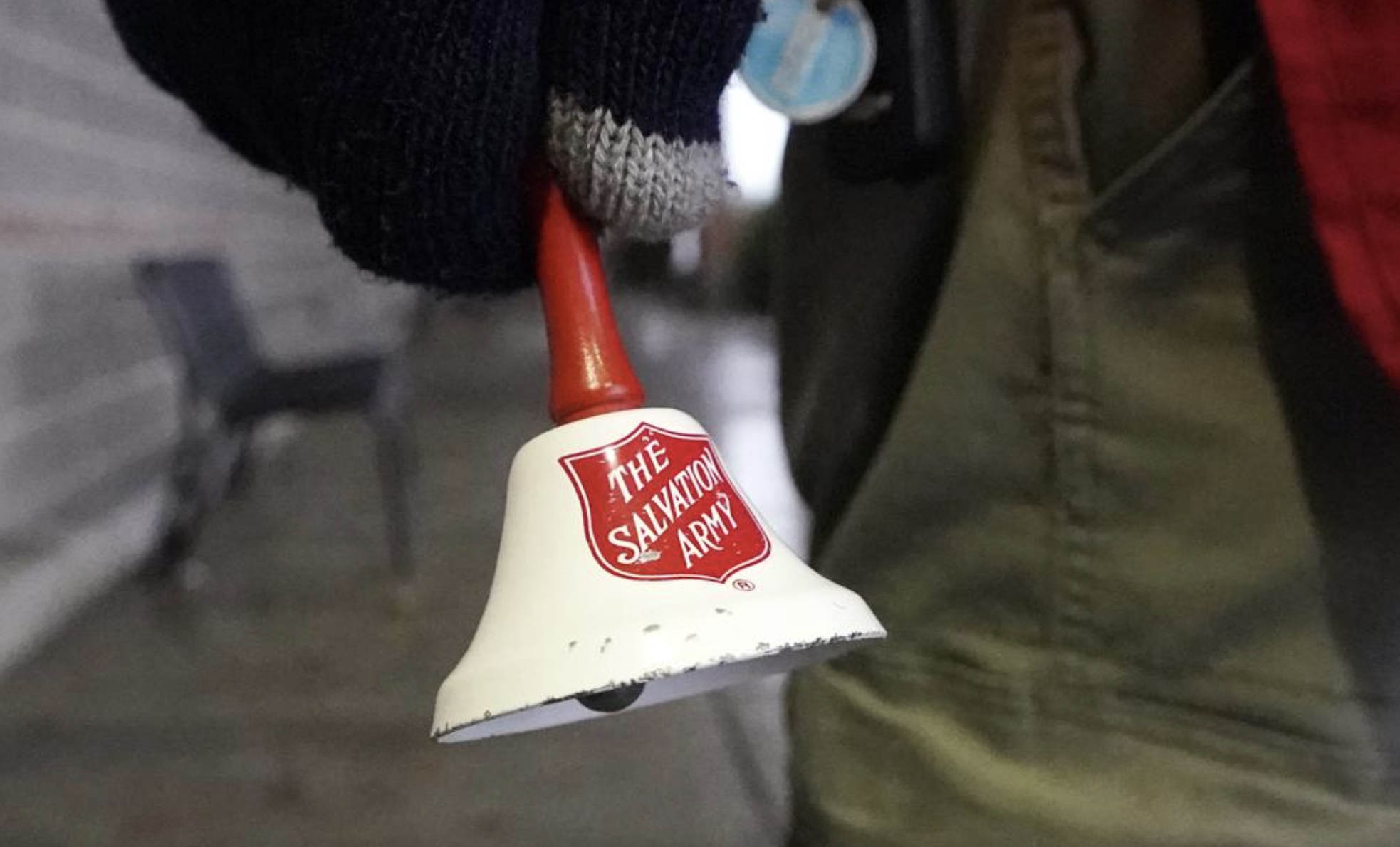 A Salvation Army bell is rung by Michael Cronin as he staffs the charity's red donation kettle in front of a grocery store, Tuesday, Dec. 8, 2020, in Lynden, Wash. In the wake of the most devastating public-health emergency in a century and the resulting economic uncertainty, Americans provided more charitable dollars to United Way Worldwide than any other nonprofit focused on direct aid, followed by the Salvation Army and St. Jude Children’s Research Hospital, according to new rankings by the Chronicle of Philanthropy. (AP Photo/Elaine Thompson, File)

In the wake of the most devastating public-health emergency in a century and the resulting economic uncertainty, Americans provided more charitable dollars to United Way Worldwide than any other nonprofit focused on direct aid, followed by the Salvation Army and St. Jude Children’s Research Hospital, according to new rankings by the Chronicle of Philanthropy.

The most striking increase in charitable giving last year came at Feeding America, a national network of more than 200 food banks, which grew the fastest of the 100 nonprofits in the Chronicle rankings. Feeding America raised over $515 million last year, more than three-and-a-half times what it brought in in 2019.

Even with that increase, though, Feeding America officials — like the leaders of other nonprofits — are worried about what will happen as the urgency of the health and economic crises fade but demand for charitable services continues.

“We are in a fortunate position to have such an influx of donors, but the need is enormous,” says Casey Marsh, chief development officer at Feeding America. “The cameras have started to go away from the food bank lines, but the lines haven’t gone away. It’s so incredibly important that people stick with us.”

At the Salvation Army, officials are worried that Americans will hold back after nearly two years of feeling the urgency of the pandemic. “What we fear, like other nonprofits, of course, is donor fatigue,” says Dale Bannon, national community-relations and development secretary at the Salvation Army, which raised $1.8 billion last year, an increase of 31%.

The findings come from the Chronicle of Philanthropy’s America’s Favorite Charities ranking of organizations that earn the most direct financial support from individuals, foundations, and corporations. The Chronicle gathers information from federal informational tax returns that nonprofits file and other reporting to determine which organizations fared the best.

Roughly $1 out of every $11 donated in 2020 went to the 100 nonprofits on this list, a sign of the gigantic percentage big nonprofits get compared to the more than 1 million other charitable organizations in the United States.

While the big charities get a large share of Americans’ dollars, they did not do as well last year as nonprofits over all. Adjusted for inflation, the 100 top charities raised 2.7% more than in 2019. Overall, charitable giving last year grew 3.8% in 2020, according to estimates from the annual “Giving USA” report.

The share of Americans who give has been declining for decades and now hovers at 50% even as total giving continues to increase. But the pandemic deepened charities’ reliance on donors who can make the biggest gifts, and that is likely to continue in the years ahead, says Eric Javier, managing director at the consulting firm CCS Fundraising.

“If the market stays high and full employment lags, I would predict that this trend will continue: Charities will depend on the wealthiest donors,” he wrote in an email. “These donors have both the financial capacity and psychological comfort to consider major gifts.”

But working nonprofits like the Salvation Army and Feeding America are not the only entities that can accept tax-deductible contributions. In recent years, many high-net-worth donors have chosen to give to donor-advised funds, the charitable-giving accounts housed at commercial banks, community foundations, and other charities.

While donors receive an immediate tax break for their contributions to these funds, there is no required timeline for directing those funds to working nonprofits. That’s why the Chronicle does not count them in its rankings, which focus on money flowing out of donors’ hands into charities doing work today.

Still, the size of those donor-advised funds compared with other nonprofits is eye-catching. Fidelity Charitable alone took in upwards of $10.7 billion last year, almost triple the nearly $3.6 billion United Way Worldwide (No. 1 in our survey; raised 3.3% more than in 2019) raised and nearly six times what the Salvation Army collected.

To compete for funding in an environment in which the wealthy dominate charitable giving, United Way Worldwide has made big changes. It was once defined by its workplace-giving campaigns, which raise recurring, modest contributions from everyday people. But those efforts have been declining for years, falling 15% in 2020, in large part because of remote work or layoffs due to the pandemic.

Gifts of $10,000 or more helped the organization increase its cash support by more than 3% from 2019 to 2020. Those big contributions meant that for the first time since 2014, United Way Worldwide’s donations grew year over year. Among those big gifts were contributions from MacKenzie Scott, the novelist and former wife of Jeff Bezos, who supported 46 United Way affiliates across the United States.

While leaning on affluent Americans produced fundraising success at the legacy social services group, Tolli Love, chief investor relations officer at United Way Worldwide worries that the nature of United Way will change as it relies less and less on the working class.

“United Way likes to think of ourselves as democratizing philanthropy,” Love says. “To have fewer people deciding where the philanthropic resources go, it’s a danger or a risk that could possibly leave everyday community supporters disenfranchised.”

One reason major donors felt emboldened to give big last year was the booming stock market. Some charities — especially colleges and universities — have decided to launch major fundraising drives to attract big gifts from high-net-worth donors.

“There’s a momentum there, there’s a heightened interest in philanthropy,” says Karin George, managing principal at Washburn & McGoldrick, a fundraising firm that primarily works with independent schools and colleges and universities.

Nonprofits say they also benefited as donors were willing to provide them money for their operating expenses, like paying utility bills and technology costs, rather than earmarking aid for specific programs as they often do.

In 2020, individual donors to the YMCA of the USA (No. 63; raised $338 million in 2020, down 3.3% from 2019) went above and beyond their usual gifts to fund the services the charity offers, making no-strings gifts directly to the charity’s national office. These contributions helped the headquarters set up programs including child-care programs for essential workers who lived incommunities under stress from natural disasters, disease outbreaks, and other challenges.

Rebecca Bowen, its chief advancement officer, credits some big unprompted gifts to national media coverage of YMCAs across the country meeting community needs. A large one came in after NPR ran a story on the YMCA that featured a photo of kids in a child-care program pretending to be airplanes to stay socially distanced.

“The adviser who called said, ‘My donor saw that picture,’” Bowen says.

Even charities that had banner fundraising years in 2020 are uncertain how the pandemic has changed Americans’ thinking about the best ways to do good.

“What happens when all the people of this country live inside for a year and a half?” wonders Sara Rubin, vice president of development at Ohio State University (No. 51; raised $398 million in 2020, up 11.8 percent from 2019). “For some people, it stimulated them to focus on what’s important in life, and in some cases, that drives philanthropy up, and for others it drives it down.”